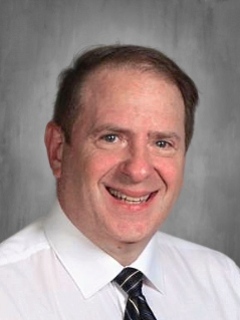 ARTHUR MARTONE ’80 (Musical Director, Classroom Vocal Music, Department Chair) is well known in the Erie area as a vocalist, music teacher, conductor and director. Mr. Martone graduated summa cum laude from Mercyhurst University with a B.M. He has been in education since 1984, presently teaching music at Mercyhurst Preparatory School since 1988, and he is the chairman of the Performing Arts Department. During this tenure, he has been the musical director for over 30 musicals that have been staged at the school.  Some of these musical highlights included the 1995 mainstage production of Nunsense at the ITS Thespian Festival in Lincoln, Nebraska, the first production of Les Miserables (2002) in western Pennsylvania and the summer of 2005 production of Little Mary Sunshine at the Festival Fringe in Edinburgh, Scotland.

Beginning in 2007, Mr. Martone took over the direction and production of the school musicals, the output including Godspell; The Sound of Music; You’re a Good Man, Charlie Brown; Peter Pan (flying by ZFX); Babes in Arms; Bye Bye Birdie; Once On This Island; The Wizard of Oz (flying by ZFX); Little Women; Seussical; Children of Eden; The Music Man; Brigadoon; Rodgers & Hammerstein’s Cinderella and The King and I.  The highlights were the northwestern Pennsylvania premier high school productions of The Phantom of the Opera (chandelier by ZFX) in 2011, Cats in 2014 and Mary Poppins 2017.

As a former member of the Erie Opera Theatre, Mr. Martone has been involved annually with almost all of its productions from 1984 to 2009 as either a performer or director. He has directed and performed in multiple productions of Amahl and the Night Visitors as well as directed the Erie Opera Theatre’s productions of Die Fledermaus, The Elixir of Love, Tosca and Carmen.  As a vocalist, Mr. Martone has also sung as a soloist with both the Erie Chamber Orchestra and the Erie Philharmonic.

Mr. Martone has also been seen on the stage at the Erie Playhouse in their productions of My One and Only, Anything Goes and the concert versions of Kismet and My Fair Lady in conjunction with the Erie Philharmonic.  He has also taken up the baton for them in Barnum, A Chorus Line, 1776 and Oklahoma! Mr. Martone was also the assistant conductor for the Erie Chamber Orchestra until 2012, conducting works from multiple composers including Mozart, Haydn, Vivaldi, Bizet, Sibelius, Gershwin, Strauss, Ellington, Rodgers & Anderson.  His conducting credits also include The Erie Parks and Recreation Department, the Titusville Summer Theater, the Diocese of Erie All-School Summer Musical and the Bicentennial All-Mozart concert at Saint Peter Cathedral commemorating the 200th anniversary of the death of Mozart.

MARYANNE DOMBROWSKI (Chorography, Dance Company Instructor) is well accomplished in the Erie area as both a teacher of dance and as a choreographer.  She is a graduate of Villa Maria Academy, and during her high school summer vacations, she spent time in New York City with Marge Long from Long’s School of Dance, working on certification from Dance Educators of America. She then attended Stephens College in Columbia, Missouri, where she received her BFA in dance and music (piano/voice).

Mrs. Dombrowski’s graduate work in theatre and dance was done at Western Kentucky University, Bowling Green, Kentucky. While at Western, she had an internship with the Dance Department. She assisted the dance director with teaching, choreographing, rehearsing and costuming. She also performed, assisted directed and choreographed for Western’s Children’s Theatre program. Mrs. Dombrowski choreographed as well as played the role of Mazeppa in Gypsy, and the housekeeper in The Man of La Mancha in WKU’s main stage productions.

After graduation, Mrs. Dombrowski was asked to stay on at Western as a full-time faculty member, teaching dance and theatre appreciation classes. She accepted the position for the next two years. During summer breaks, she choreographed for outdoor theatre productions in Virginia, Oklahoma and Kentucky.

Mrs. Dombrowski moved to New York City for audition purposes, where she also continued her dance and voice training. While in New York, she was given the opportunity to choreograph a piece for the CBS special, That’s Tap Dancin’, with the cast of the Broadway show 42nd Street. She toured as the dance captain and lead dancer in Jubilation.

Family brought her back to Erie, where she continued to be a part of the theatre. She began working with Ben Agresti’s Dinner Theatre, where she performed in many musical productions. The Erie Playhouse also offered performance opportunities such as Cassie in A Chorus Line, Lola in Damn Yankees and Peggy Sawyer in 42nd Street. Mrs. Dombrowski has also worked as choreographer and performer for the Erie Opera Theatre.

In 1985, she established the dance program at Mercyhurst Prep. She is the dance director, teaches Dance Company classes and is the choreographer of all the school musicals as well as the MPS Show Choir.

KARA GRISÉ ’99 (Choreography, Dance Company Instructor, Business/Technology Instructor) attended Penn State Behrend, where she earned a B.S. in Marketing and an MBA.  In the spring of 2017, she completed a master’s degree in Instructional Design and Technology Integration from West Virginia University.  Ms. Grisé received honor cords at graduation for academic excellence, and she was invited to lecture at the West Virginia State Technology Conference as a representative of WVU.  In addition, her graduate work in computational thinking was published.

Ms. Grisé has also been active in the performing arts with over 30 years of experience as a dancer and 15 as a dance teacher. She is a member of the company at Marguerite’s Academy of Dance, a role which has led her to perform on stages around the world.  In the fall of 2000, Kara traveled with the company to Sydney, Australia to perform at the 2000 Summer Olympics.  She has also performed with the company locally and on Broadway.

Ms. Grisé currently teaches courses in dance, business and technology.  Her Dance Company choreography has delighted audiences at Mercyhurst Prep for the past 12 years.  She is also proud to have coached the Mercyhurst Prep dance team for three seasons, coaching the team to several first place finishes in local competitions. Ms. Grisé has also choreographed pieces for the MPS Dance Company Disney performances.

MICHAEL MIELE ‘03 (Instrumental Director, Musical Vocal Director) is the Director of Instrumental Music at Mercyhurst Preparatory School, where he oversees the school’s orchestra program and is the musical director for all Mercyhurst theatrical events. In this position, Mr. Miele conducted the Northwestern Pennsylvania high school premieres of Andrew Lloyd Weber’s The Phantom of the Opera in 2011, Cats in 2014 and Mary Poppins in 2017. In addition to his work at MPS, Mr. Miele spent ten years as the music director for the All-School Summer Musical sponsored by the Diocese of Erie’s Office of Education. He has also been the rehearsal accompanist and assistant choir director for the Erie Opera Theatre. An active trombonist and piano player in the Erie area, Mr. Miele is a member of the orchestra at the Erie Playhouse, where, among other credits, he was the associate conductor for their fall 2012 production of Les Miserables and conductor for last month’s production of Ragtime and for the Erie premiere of Disney’s Mary Poppins in December of 2013.  He is an active member of The Pennsylvania Music Educators Association (PMEA) and The National Association for Music Education (NAfME).  Mr. Miele graduated summa cum laude from Mercyhurst University with a bachelor’s degree in Music Education in 2007 and was that year’s recipient of the President’s Award for Academic Excellence in the Arts and Humanities.  In 2015, he was named one of Erie’s “40 Under 40” by The Erie Reader.

DAVID MITCHELL ’87 (Theatre Director, Acting Instructor) is the co-owner and artistic director of All An Act Theatre Productions in Erie.  As a student, Mr. Mitchell was deeply involved with the MPS theatre program with memberships in Chorus, Show Singers, Children’s Theatre Ensemble, and the International Thespian Society (Honor Thespian, 1986 and Best Thespian, 1987). He also served as ITS president his senior year. Mr. Mitchell has been involved as an actor and director in the Erie theatre community throughout his adult life, performing in and/or directing shows at The Erie Playhouse, Roadhouse Theatre, Director’s Circle Theatre, Station Dinner Theatre, and, of course, All An Act Theatre. He has also been the administrative director for the Erie School District and City of Erie’s Footlights Theatre Program for Erie youth for 28 years. He is thrilled to return to Mercyhurst to guide these amazing young men and women.